for english scroll down the page, please. 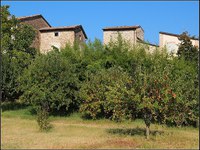 THE CASTLE AS A PLACE OF THE IMAGINARY

Castello (chateau in French, or burg in German), this word deriving from the Latin castellum or castrum (fortress) is a word that, in addition to indicating that fortified residence that we all know, also has a strong evocative power and hides many other symbolic meanings. I state that I am not interested in making a historical speech, nor a tourist promotion of our territory, which is very rich in castles, rather I will try to express a personal opinion on the subject, between the fantastic and the curious.

The castle is a place that has always been part of our imagination: there is no fairy tale, legend, tale of fear or romantic adventure that does not have its castle, or almost, and a white castle with a thousand towers, very high, symbol of Disney, is imprinted in our imagination from an early age, I would say that it has now become an archetype, it is part of our collective unconscious, I would dare to say that the castle is mainly a symbolic place as well as an architectural construction, a place very similar to ours same unconscious, to our own mind.

Think for a moment of our brain, so labyrinthine with all its convolutions, and think of a large castle, with all those halls, halls and rooms, spiral staircases, towers, wells, secret passages, grates, cells, corridors ... a labyrinth in short, like our head! In our mind, as in a castle, we can lock ourselves up and feel protected, we can raise the drawbridge and close the doors, to resist the haunting siege of the outside world. In the castle, as in our mind, we have high towers that rise towards the sky, towards the elevated peaks of thought and soul, and deep underground passages dug into the primordial rock, humid, gloomy and dark, in which they hatch in secret, far from prying eyes, the most hidden emotions, just like in our mind! And then there are the characters that populate the castle: witches, fairies, jesters, warriors, courtesans, brave knights, beautiful princesses, often also dragons, ghosts and other deformed creatures, between the mythological and the imaginative: all characters that can be the personification of some peculiarities of our soul and our emotions (like the Gods of the ancient world in short), our mind is populated by a myriad of strange characters, all facets, projections of ourselves. And as in a castle, even within us we have court intrigues and power games, but also noble thoughts and chivalrous feelings, in short, we have incorporated a whole world and a whole series of figures who interact, as if they were characters of a small and hard-working medieval society, which lives around its castle, with its wars and its truces, its heroes and its martyrs, its economy, its laws and its currency. The castle is a fantastic theater where the inner movements of our soul play out: I like to see it in this perspective, a little psychological, or psychopathological if you prefer.

Castles have existed in all cultures since the dawn of humanity (castle intended as a protected, defended place). They are symbols loved and hated at the same time, they are friends and enemies, friends inasmuch as I can defend and protect, but they are also enemies in that they are places of exercise of power, often exercised in an arbitrary and narrow-minded, violent, mean, vulgar way, and without no link with justice. Even our mind, if you think about it, is a friend, but often it is also an enemy of ourselves, the analogies are many ...

The Middle Ages is a rich and fascinating period, as opposed to how it is usually painted (dark age), an era in which life was reduced to the essential, simple and concrete, and today we very much need simplicity and concreteness, but would we be willing to go back in time? Even just a few years? Living in another time is a dream or a desire that we all think about, at least once in our life, we have abandoned ourselves. Today we are lucky enough to live in a continent and a relatively quiet era (I'm talking about Europe), perhaps for this reason there are many historical reenactments around, especially medieval ones, where we can relive ancient battles without danger or immerse ourselves in the atmosphere of times far away (and we can also insert role-playing games in this speech) .It is beautiful and interesting, but if we had just come out of a war, I don't think there would be so many historical reenactments of battles, there would be only desire for fun and carefree : we are always attracted to what we don't have, for better or for worse. For me, however, a lover of photography, these re-enactments are very interesting workshops, where I have the opportunity to photograph many people and investigate human emotions, immersed in very fascinating sets and costumes.

The Parma area, and Italian more generally, is scattered with castles and ruins, and even where castles no longer exist, a memory of them remains in the names of the places, in the toponymy: in every corner we see places with names whose root in fact takes you back to the deep Middle Ages: castellaro, fortress, hall, tower, and so on.

I would like to underline this important thing: we are used to consider the Middle Ages as an epoch of decline, the so-called dark ages, but this is not the case at all: it was an epoch of cultural ferment, of deep spiritual research, a lively epoch in which a virtue was made of necessity, everything in nature was a resource, there was no waste or waste, a perfect circular economy: everything was used and reused, and above all, contrary to what we imagine, in the Middle Ages, and even in the remotest antiquity , one traveled, one probably traveled much more than modern man travels, and one traveled with deeper motivations, not as bored or fun-seeking tourists. We tend not to consider this, but modernity and technology are just accessories, the passions, desires, needs and needs of the human soul are always the same. Life was equally exciting in the Middle Ages, Ancient Egypt or the Iron Age, even without cars or mobile phones. In reality, many things about history, from every era, should be reviewed and re-evaluated, the narration of history is often remodeled to support a certain ideology or culture. Many of the things we see and use even today are of medieval origin. Our own way of thinking, many of our customs, the political fragmentation of our country, the cultural diversity of our regions, are all characteristics of medieval origin, it is in the Middle Ages that the roots of our traditions lie.

Investigating the Middle Ages in the Parma area, I was amazed at how many castles have existed in my land, really many, I found news of as many as 232 castles, fortresses, towers and strong places, of which many today survive in majestic examples, such as the magnificent Bardi o Torrechiara, others remain skeletal architectural fragments, like ghosts of the past, many others have been remodeled to meet new needs, so ancient fortresses have been transformed into noble residences, as in Soragna, or in rustic courts like Giarola, of many others there is still only fragmentary news on ancient yellowed parchments !

Some time ago I set myself the goal, a bit ambitious given the number, of taking a photographic testimony of all the parmesan castles, both of the best preserved and most famous and those reduced to ruins; those that can be seen photographed in all books and brochures for tourists, and above all those who do not enjoy the same fame, as those who are now reduced to a few, unadorned and unjustly forgotten stones. It is above all these ruins that fascinate me, because, even if now only piles of stones remain, those sad vestiges smell of history, here battles thundered and history was forged, and today they have a lot of things to tell, even if almost none wants to listen to them: these ruins possess for me a great and mysterious fascination linked to the mystery of life and death, and how human events appear so terribly in vain.

All this is a way of trying to rationally explain to me the great fascination that these ancient and seductive constructions exert on our imagination, but perhaps they are just far-fetched thoughts, and the reason for our emotions will always remain a secret buried deep inside, unfortunately we always have the need to "explain" everything, perhaps we ask ourselves too many useless questions, and this need is expressed by rivers of words! But luckily there is a barrier to the river of words: it is photography, which expresses a lot without saying anything, nothing grammatical. All this to say that now I stop, and I leave the "word" to the images ...